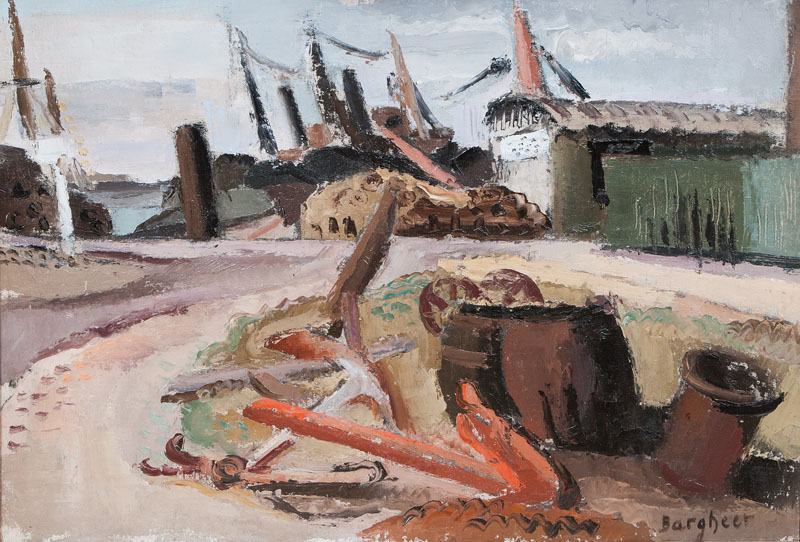 Anchors and Machine Parts in a Harbour Area | Reserveprice 7.000 €

Oil on canvas, 50,5 x 64 cm, lo. ri. sign. Bargheer, verso view of a landscape. - This painting is one of B.'s early works and was executed in the second half of the 1920s. It is still largely unaffected by Edvard Munch's work, which took major influence on the artistic development of Hamburger Secession. Accordingly, B. hereby created a prime example of northern German late Expressionism. Regarding its structure, this portrayal of a harbour area is more formal but all the more powerful than later luminous water colours, which are not far from abstract painting. That way the anchors and machine parts, shown in this artwork, turn into monumental eyecatchers within the elaborate structure of the picture. - Painter, draughtsman a. graphic artist, one of the leading heads of German avantgarde. By request of his father he became teacher but entered on an artistic career in 1924. In 1927 he started teaching at the art school of Gerda Koppel in Hamburg, at the same time he met Gretchen Wohlwill who was to become a lifelong friend. Since 1935 he lived alternately on Ischia a. in Hamburg-Blankenese, in the 1960s he also travelled North Africa. After WW II he taught at the Hamburg a. Berlin academies. B. had many exhibitions, among others at the Documanta I a. II. - Mus.: Hamburg (Kunsthalle, Altonaer Mus.), Cologne, Karlsruhe, Hannover a. others. - Lit.: Der Neue Rump, Baumgart, Heydorn, D. Rosenbach: E. B. Werkverzeichnis d. Druckgraphik 1930-1974 a. others.