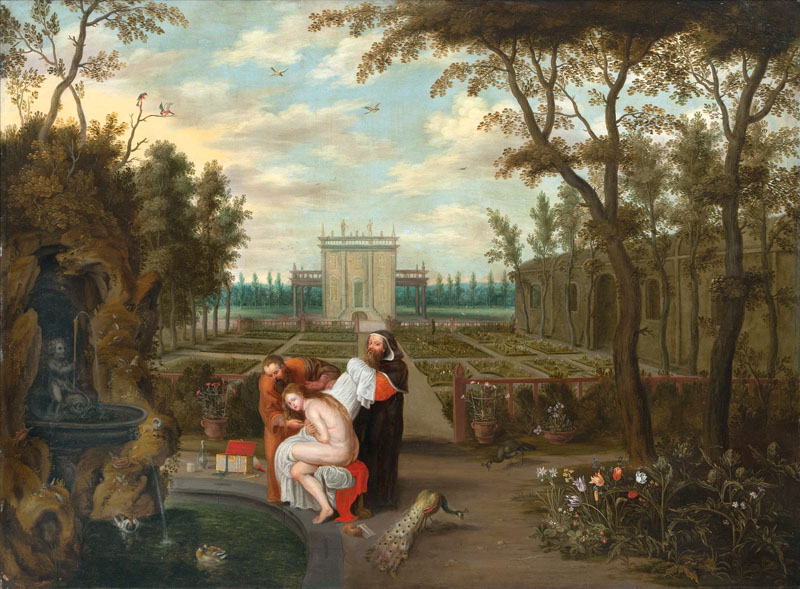 Ca. 1640, oil/copper/wood, 59,5 x 78,5 cm, cradled. - From the early 1640s Brueghel the Younger began to develop his own style distinct from that of his father. At the same time he often used large-size copper plates. Luuk Pijl dates this formerly unknown painting to the beginning of this period, emphasizing the outstanding quality and the excellent state of conservation. - The old testamtent theme of Susannah and the Elders was very popular among 17th century painters. It is an exemplum story of virtue, but it gave also the opportunity to an artist to depict a caste and beautiful nude woman. - Expertise: Dr. Luuk, Pijl, Dokkum, 31. January 2017. - Flemish history, landscape a. flower painter, son a. pupil of Jan B. the Elder. In 1622 he travelled to Italy, after his father's death in 1625 he returned a. took over his flourishing workshop. Later he worked also for the Brussels court a. the Paris tapestry manufacture. He continued his father's work. His landscapes, often allowing a view to a misty distance show a delicate perspective of colours, his minutely painted flowers captived by the jewel-like refinement.