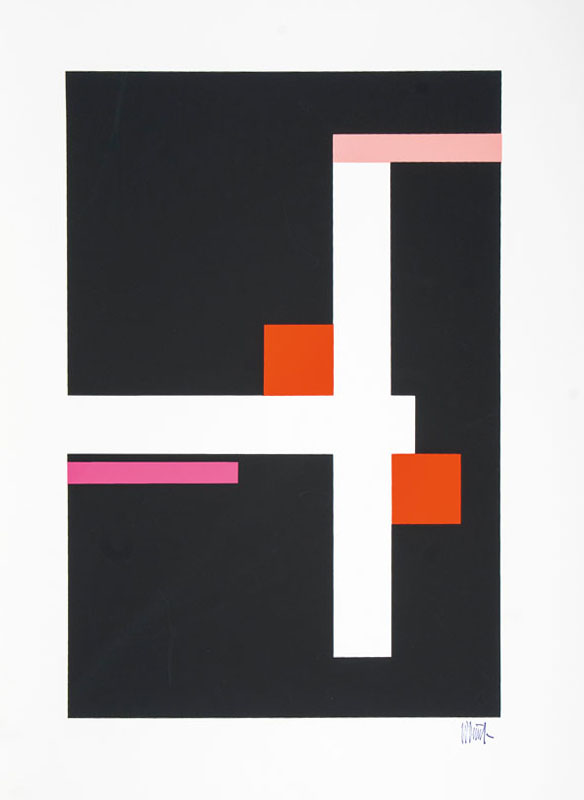 1972, silk screen in colours, 42,5 x 29 cm, lo. ri. stamp sign. W. Dexel, after a design of 1926, unframed, aside from the edition of 120 copies for the 'Kunstverein für die Rheinlande und Westfalen', Düsseldorf, printed by Adolf Pilz, Brunswick, unframed. - Literature: Catalogue raisonné: Vitt 74. - Provenance: From the family of the artist. - German painter, graphic artist, designer a. art historian. D. studied 1914-19 art history in Munich, but also took drawing lessons. After WW I he became head of the Jena Kunstverein. He was in contact with the Bauhaus a. exhibited with the avantgardist 'Novembergruppe' in Berlin. Since 1926 he worked as free-lance designer a. taught at the academies a. art schools of Magdeburg, Berlin a. Brunswick. He was temporarily discharged by the Nazis a. some of his artworks were removed from exhibitions as 'degenerate'. Only in 1962 he started working as artist again. After a short cubist period D. developed his typical constructivist style which is characterized by a larger variety of forms a. colours, compared to the artists of 'De Stijl'.