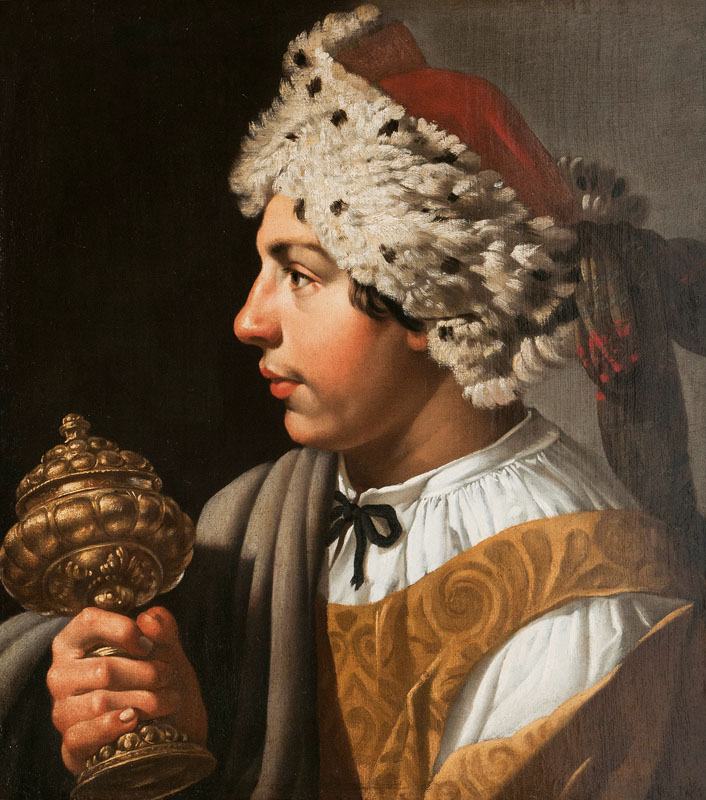 1660s, oil/canvas, 6835 x 59,5 cm, relined. - Notwithstanding the unusual single depiction of the kings they obviously are thought as an entity. The three figures are personifications of the three continents known in the early middle ages. Balthazar as representant of Africa and Melchior as representant of Asia seem to turn towards Caspar as representant of Europe. The coins and corals in an exotic shell preseented by Balthazar can be read as allusion to the Dutch oversea trade of the 17th cent. - Expertise: Sylvain Kerspern, Melun, 12.02.2015. - Dutch figure a. history painter from a family of artists. As early as 1632 E. became member of the painter's guild in Alkmaar, before continuing his studies in the studio of J. G. Bronckhorst in Utrecht in 1637/38. He established as leading portrait a. history painter in his home town Alkmaar. His painting for the Huis ten Bosch in The Hague, executed since 1648, are considered to be his masterworks a. among the best achievements of Dutch painting of the 17th cent. Thereafter he moved to Haarlem where he soon became a leading member of the local painter's guild. In 1662 he returned to Alkmaar. E. is one of the greatest masters of the classicist tradition of Dutch painting which was long underestimated in comparison to realist landscape painting a. the style of artists like Rrembrandt.