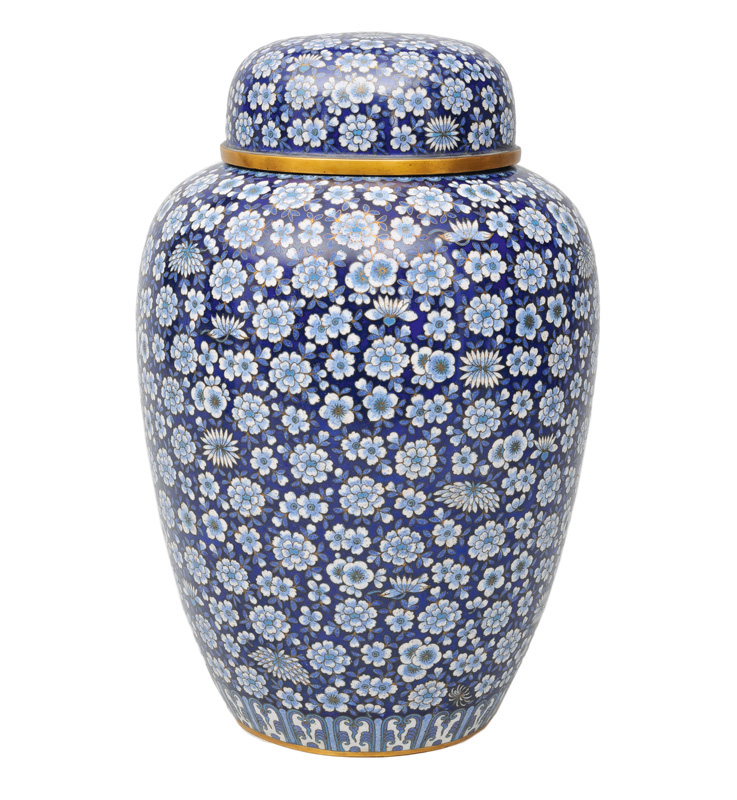 China, around 1900 (Qing-dynasty 1644-1911). Blue-white enamelled cloisonné on a copper body. Large ovoid vase with cover with a dense flower decoration on a bright cobalt underground. On a finely carved wooden stand. H. 31,5 cm. - Prov.: Two objects from the collection of Curt Rothkegel, acquired in Tsingtau (Qingdao) around 1910 (Lot 855 ? 856). Curt Rothkegel (1876-1945) was a German architect, working in China between 1903 and 1929. Most of his buildings can be found in the city of Qingdao, the former German colony Tsingtau. Rothkegel designed and built several important buildings in the city, among them the famous Christuskirche (Christchurch), which has been renovated recently. Due to his tremendous success commissions for other Chinese cities and in neighboring countries followed. He built several private houses for high-ranked celebrities in the capital Beijing and the International Club house (1912). ? Lit.: Warner, Deutsche Architektur in China, Berlin 1994; Yuan Bin-jiu, German Architecture in Qingdao, Beijing 2009.