A rare armorial plate from the famous "von Münnich-Service" 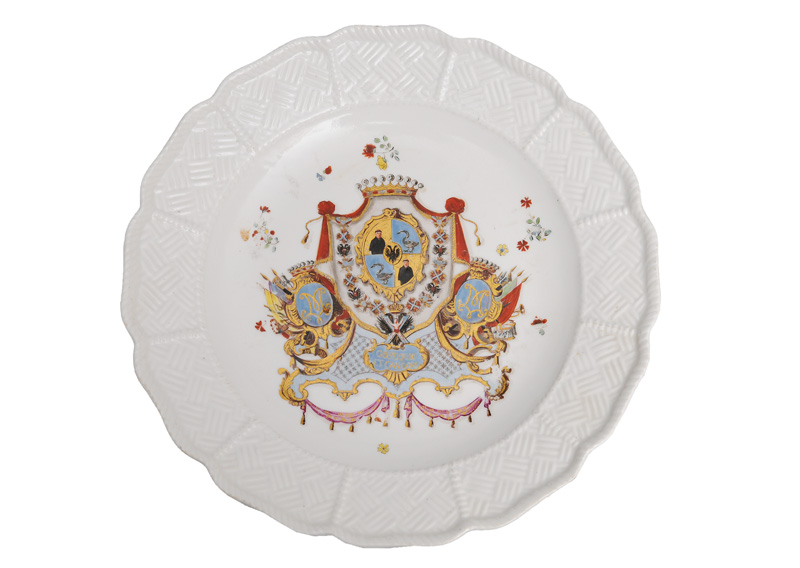 A rare armorial plate from the famous "von Münnich-Service" | Result 5.000 €

Meissen, around 1738. In the centre the richly embellished coat of arms of Graf Burchard Christoph von Münnich, surrounded by the ribbon of the Russian "Saint Andrew First Called"-order. Underneath the crest a reserve with the inscribtion "Obsequio et Candore" (In allegiance and honesty). The rim with "Sulkowsky" relief pattern. Crossed swords in u"glaze blue. Diam. 24 cm. - Graf Burchard Christoph von Münnich (1683-1767) was born in Hesse and started his carreer at the Saxonian court of August dem Starken. He settled to Russia in 1721 and continued his courtly success under the Tzars. He first became governor of Saint Petersburg and later Generalfeldmarschall. After a Siberian exile he crowned his professional life as an honoured Vertrauter of Tzaress Catherine II. The extensive Meissen service, commissioned for von Münnich, belongs to a group of famous 18th cent. Services, like the "Swan-service" or the "Sulkowsky-service". Especially to the latter it is closely related, regarding the armorial decoration and the relief pattern at the rim. Lit.: Hamburger Museum f. Kunst u. Gewerbe, Meissener Porzellan d. 18. Jhs., Katalog der Slg. Hoffmeister, Bd. I, Hamburg 1999, pp. 528f., 604-607.