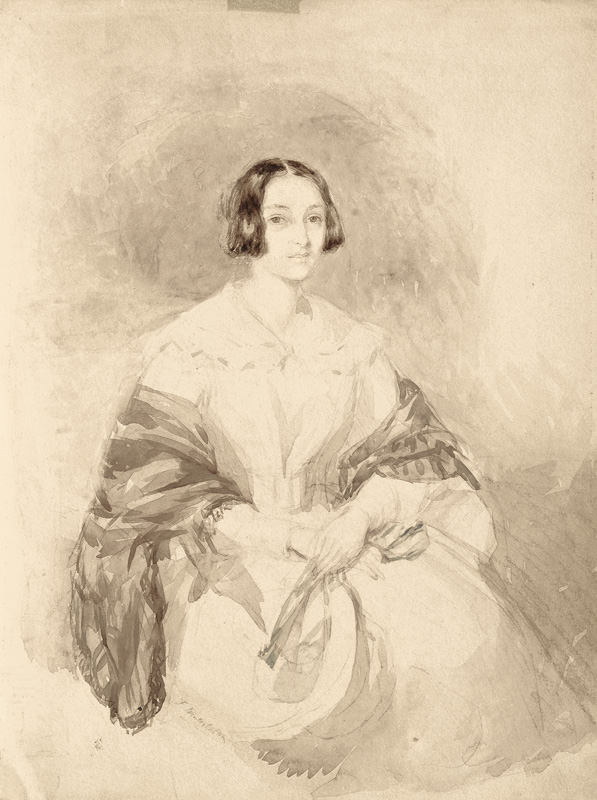 1843, watercolour, 35,5 x 26 cm, lo. le. sign. F. Winterhalter. - Cat. rais.: Eugene Barilo von Reisberg 236a. - The painting is published in: Harold A. Albert: Queen Victoria"s Sisters. - Feodora zu Leiningen became a princess of Hohenlohe-Langenburg by marriage. She was as half sister of the English queen Victoria and a niece of the Belgian king Leopold. - One of the most successful a. sought-after portrait painters of the 19th cent., after beeing trained as a lithographer in Freiburg he could study at the Munich academy by means of a scholarship, he worked in the studio of J.K. Stieler, in 1834 he became painter to the court in Karlsruhe but moved to Paris in 1836 where he soon became the most fashionable portrait painter, he was made painter to the court in Paris, London a. Madrid but also worked for the courts in St. Petersburg a. Vienna. - London (Königl. Sammlung), St. Petersburg (Eremitage, Russ. Mus.), Paris (Musée d"Orsay), New York (Metrop. Mus.), Los Angeles (J. Paul Getty Mus.) u.a. - Lit.: Boetticher, Thieme-Becker, Bénézit u.a.