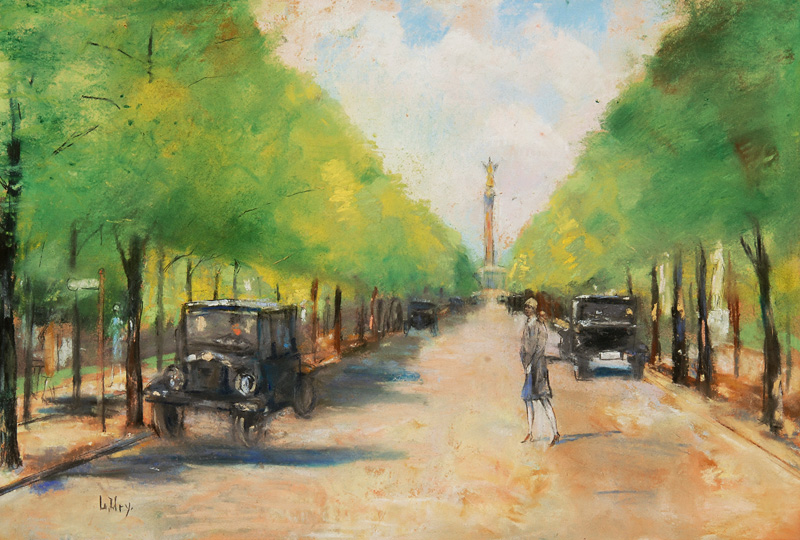 The Berlin Siegesallee with Siegessäule in Summer | Result 92.900 €

Pastel, 35 x 50 cm, sign. lo. le. L. Ury, matted a. framed under glass, uninspected out of frame. - Expert report: Dr. Sibylle Groß, Berlin, 19.7.2011. According to Dr. Groß the work was created in the mid 1920s. The pastel will be included in the catalogue raisoné being prepared by Dr. Groß. - Prov.: Since 1981 private collection North Germany. - The Siegesallee - Victory Avenue - was built on behalf of emperor Wilhelm II from 1895 to 1901. The 32 figures of rulers of the houses of Brandenburg and Prussia that flanked it brought it the nickname "puppet alley". The comparatively moderate traffic of the 1920s allows the pedestrian a smooth passage of the avenue. the Ury created several versions of the motif popular with collectors. - Landscape a. figure painter, distinguished in depicting Berlin urban life in a colourful impressionism, studied at the Düsseldorf academy under J.J.H. Müller a in Brussels under J.F. Portaels, who recommended him to L. Bonnat, went to Paris to continue his studies under J. Lefèbvre, in 1887 he settled in Berlin where he established connections with W. Uhde a. M. Liebermann, the Michael Beer prize awarded him in 1890 allowed him to go to Italy, numerous exhibitions, among others at the Berlin secession in 1922 a. in the Berlin National Gallery in 1931. - Mus.: Berlin (Nat.-Gal.), Görlitz, Graz. - Lit.: Boetticher, Thieme-Becker, Bénézit, Rosenbach "L. U., das druckgraphische Werk", 2002.