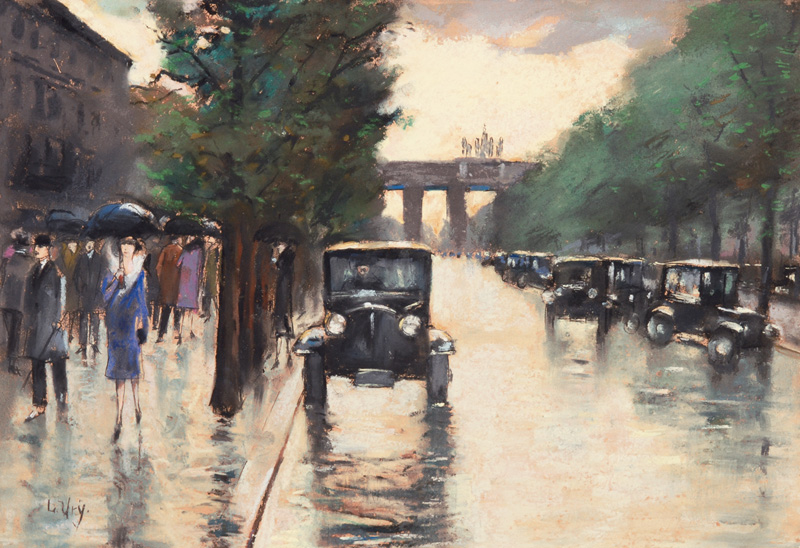 Pastel, 35 x 50 cm, sign. lo. le. L. Ury, matted a. framed under glass, uninspected out of frame. - Expert report: Dr. Sibylle Groß, Berlin, 19.7.2011. The pastel will be included in the catalogue raisoné being prepared by Dr. Groß. - Prov.: Private collection Amsterdam until 1981, since then private collection North Germany. - Exh.: Haus der Kunst, Munich, 9.8 - 5.10.1986. - Lit.: It is published in: Joachim Seyppel, "L.U. der Maler der alten City", 1987, S. 210 as well as in Reimar Zeller, "Das Automobil in der Kunst", 1986, S. 320.- During the so called "Gründerzeit", when Berlin flourished in a boom, the Boulevard Unter den Linden developed into the elegant shopping street that became the embodiment of the Golden Twenties. In one of his typical works Ury shows the crowded street in dusk after a shower. - Landscape a. figure painter, distinguished in depicting Berlin urban life in a colourful impressionism, studied at the Düsseldorf academy under J.J.H. Müller a in Brussels under J.F. Portaels, who recommended him to L. Bonnat, went to Paris to continue his studies under J. Lefèbvre, in 1887 he settled in Berlin where he established connections with W. Uhde a. M. Liebermann, the Michael Beer prize awarded him in 1890 allowed him to go to Italy, numerous exhibitions, among others at the Berlin secession in 1922 a. in the Berlin National Gallery in 1931. - Mus.: Berlin (Nat.-Gal.), Görlitz, Graz. - Lit.: Boetticher, Thieme-Becker, Bénézit, Rosenbach "L. U., das druckgraphische Werk", 2002.