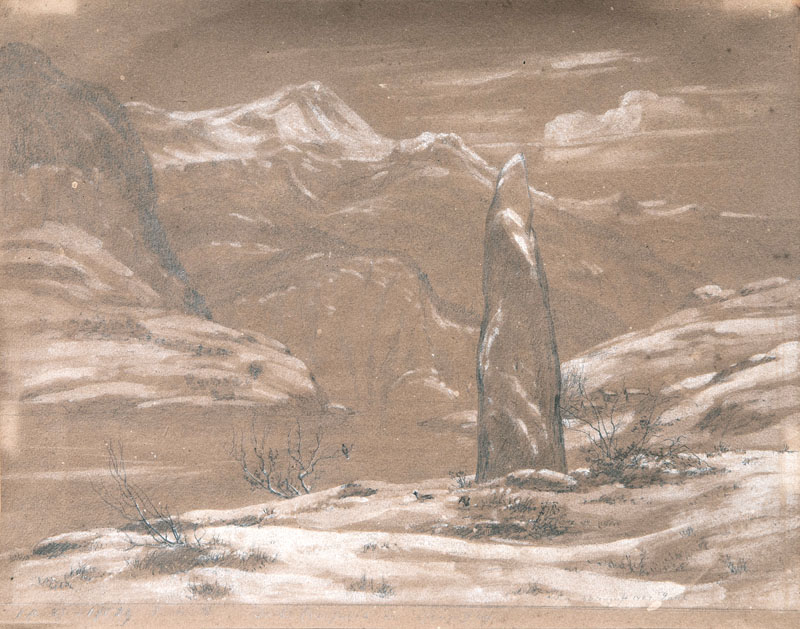 Menhir in the Sognefjord

Pencil drawing heightened with white, 19,5 x 25 cm, lo. ri. sign. a. dat. Dahl 23. August 1827, lo. ri. inscribed, on the reverse collection stamp of Prince Johann Georg zu Sachsen, framed under glass. - The detailed drawing is closely related to Dahls ‘Menhir in the Sognefjord in Winter’ in the Oslo National Gallery, painted in 1827. The artist picks up two main topics of Romantic art: the relation between past and present and the relation between nature and culture. Already millenia ago men erected a huge menhir, able to defy a cold and hostile nordic nature. The contemporary farm houses in the background in contrast duck down to the ground, nearly escaping the beholder’s eye. Prehistoric monuments are also repeatedly found in the paintings of Dahl’s friend Caspar David Friedrich. They seem to point out to a time when early relics of culture seemed to develop organically out of nature. A melancholy contemporary looks back to an age when men were seemingly living in greater harmony with their environment. - Exhibition: 'Kunstwerke, die mich angehen'. Der Sammler Hermann F. Reemtsma, Ernst-Barlach-Haus Hamburg, 11.10.1992 - 3.1.1993, cat. no 13, ill. p. 26. - Literature: M. L. Bang: J. C. D., Life and Work, Oslo 1987, vol. 2, p. 182, no. 543; The drawing is published with ill.: 'Kunstwerke, die mich angehen'. Der Sammler Hermann F. Reemtsma, Ernst-Barlach-Haus Hamburg, 1992, p. 26. - Provenance: Probably Karl Friedrich Curtius, Leipzig; Prince Johann Georg zu Sachsen; bought by Hermann F. Reemtsma 1941 in the auction house C. G. Boerner, Leipzig; given as a gift to the present owner by the Reemtsma family before 1992. - Norwegian painter, one of the main exponents of Romantic art a. one of the most important landscape painters. D. was taught painting in the studio of J. G. Müller in Bergen, since 1881 he studied at the Copenhagen academy. In 1818 he settled in Dresden, in 1820 he accepted an invitation of Prince Frederik Christian of Denmark to Italy; a sojourn that was to become distinctive for his art. D. a. his friend Caspar David Friedrich were appointed professors at the Dresden academy in 1824. Two years late D. was able to undertake a long desired first of many journeys to Norway. Subsequently subjects from his homeland began to become more important in his work. D. entrusted his estate to the Oslo National Gallery which had been co-founded by the artist.