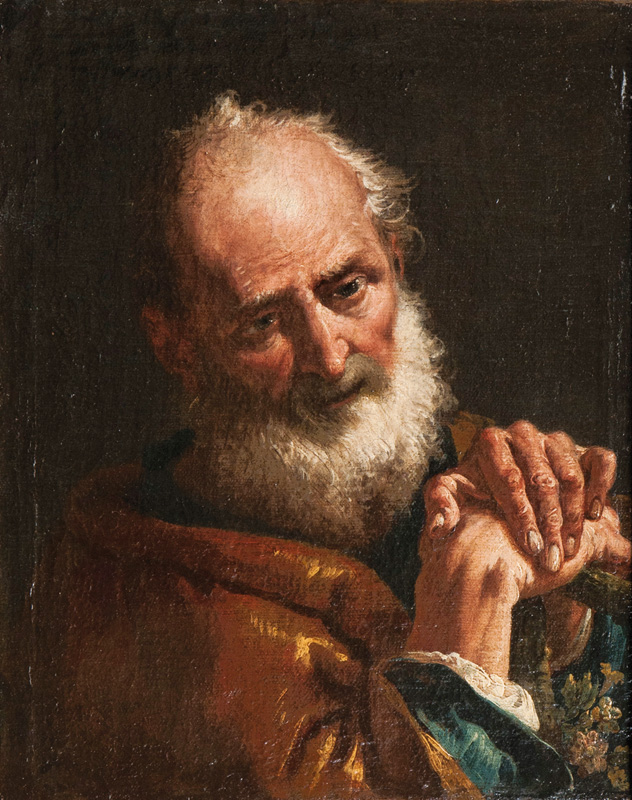 Ca. 1740, oil/canvas, 47,5 x 38,5 cm, some rest., relined. - The authenticity of the painting has been recently confirmed by Maria Magrini a. Bernard Aikema. - Cat. rais.: Magrini 1. - Prov.: Collection Wedells, Hamburg; bequest of Wedell to the Hamburg Kunsthalle 1919; sold by the Kunsthalle as Piazzetta, Sotheby's London, 8.7.1959; english private collection. - Exh.: Kunsthalle Hamburg, 'Die Sammlung Wedell', 1935. - Aaron was the brother of Mose. The priestly office given to Aaron by Mose was confirmed by a miracle: twelve rods were laid down before the ark of the covenant by representatives of the twelve tribes but only that of Aaron blossomed. - The painting shows the lighter colouring of F. as a resulto of Tiepolos influence on the artist since the 1730s. - Italian painter, draughtsman a. graphic artist. F. was pupil of S. Ricciin Venice. He went to Rome where he was awarded a prize by the Accademia di S. Luca as early as 1728. He painted many frescoes a. altar painting in upper Italy, his style being influenced mainly by Ricci a. Tiepolo. In the 1740s he rose to one of the most sought after artist in Venice. He followed Tiepolo in painting the Winter Palace in St. Petersburg in 1761. Back in Venice he was elected president of the academy in 1768. F. is considered to be one of the last exponents of the monumental venetian style. - Mus.: St. Petersburg (Hermitage), Madrid (Prado), Moscow (Pushkin Mus.), Naples (Capodimonte), Venice (Gall. dell'accademia a. others), Vienna (Kunsthist. Mus.) a. others - Lit.: Saur, Thieme-Becker, Bénézit a. others.