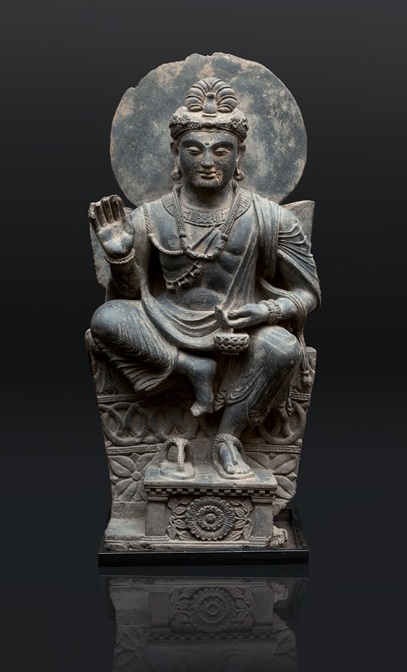 Gandhara-region/Pakistan, 2nd/3rd cent. Grey schist. Magnificently modelled Bodhisattva on a richly embellished throne and backed by a large nimbus. Seated in the position of 'Royal Ease' with the left bare foot drawn up, the left foot with an elegant sandal. The right hand raised to perform the gesture of 'have no fear' (Abhaya Mudra). The left hand resting on the lap holding a lotus (padmapani). The muscular body dressed in a traditional costume (uttariya), adorned with several necklaces, the head with elaborate hairdress. On a black metal stand. H. 104 cm. - This very rare depiction demonstrates a unique sculptural quality. The finely modelled sandals clearly show the Hellenistic influence on the art of the Gandhara region. The pose and the depiction of the lower part of the figure together with the gesture of the padmapani appears to be a variation of the 'Pensive Bodhisattva (Avalokiteshvara)'. See: Lee, The Origins and Development of the Pensive Bodhisattva, Images of Asia, Artibus Asiae, 53, 3-4, 1993, pp. 311-357. An example for this type can be found in the Matsuoka Museum, Tokyo (see: Rhi, Bodhisattvas in Gandharan Art, Vancouver 2006, S. 160). For the characteristic and rare combination of the two hand-gestures see: Krishan, The Buddha Image: Its Origin and Development, New Delhi 1996, S. 63, fig. 30a. Compare the upper part of the body and the elaborate head to the standing figure of a Bodhisattva from Shabaz-Garhi, now in the Musée Guimet, Paris. - Prov.: From a European coll. and acquired around 1930 with the help of the former Iranian prime minister Ebrahim Hakimi (1871-1959).