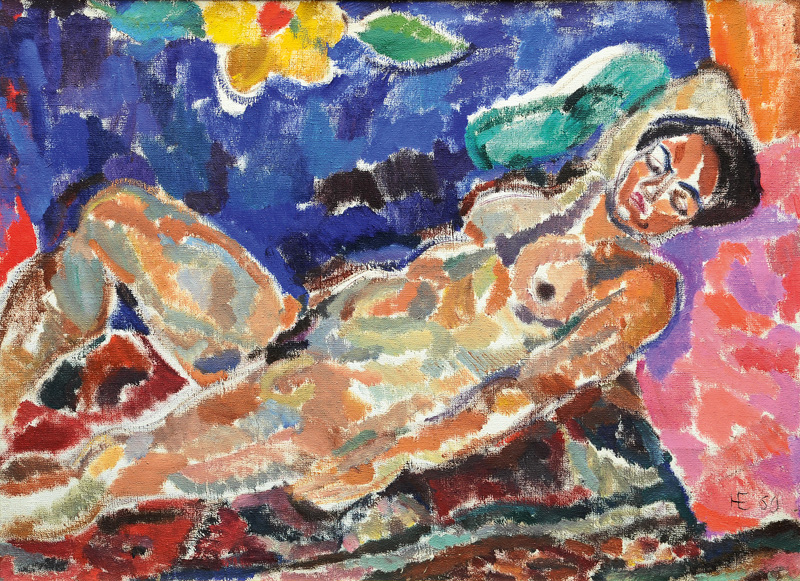 Oil/canvas, 106 x 140 cm, lo. ri. cyrillic monogr. a. dat. NE 60. - Prov.: Gallery Levy, Hamburg, in cooperation with Henri Nannen, 1982. - Russian paintress, studied at the Repin academy in St. Petersburg 1945-53, first architecture but changed to painting, since 1953 she participated in many group exhibitions, in 1979 she was honoured with her first solo exhibition in Moscow, followed by solo exhibitions in Cannes in 1968, in the Ludwig collection in Aachen in 1982 a. at the Gallery Levy in cooperation with Henri Nannen in Hamburg in the same year, the Russian Museum in St. Petersburg dedicated a great retrospective to her a. her husband N.I. Andronov in 2006. The formal subjects of her paintings are often cause for the artist to investigate into the effects of form a. colour a. so to hold the autonomy of art against the pretensions of socialist realism. - Mus.: Moscow (Tretyakov Gall.), St. Petersburg (Russ. Mus.), Sofia. - Lit.: Bown, Russische Malerei heute, AK Galerie Levy, Hamburg 1982.