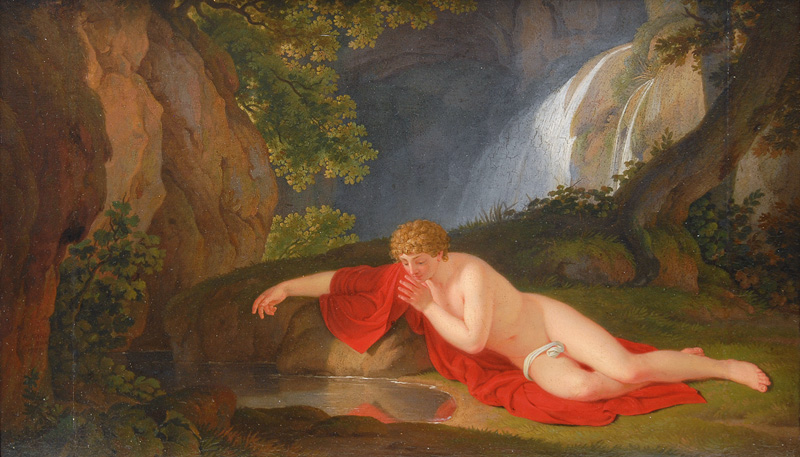 Narcissus at the Well

Oil/wood, 34,5 x 54 cm, sign. a. dat. lo. le. A. Nahl pinx Roma 1788, slightly rest. - The painting at hand is the one listed in Boetticher as no. 2. - Being very proud of his beauty Narcissus rejected all lovers a. instead fell in love with his own reflection in a pond. Becoming aware that this love can"t be satisfied he stabbed himself to death. From his blood sprang up the homonymous flower. - History, landscape a. figure painter, son of the sculptor of the same name, studied in Kassel under H. Tisc hbein as well as in Strasbourg, in Paris in 1772 he was influenced by Le Sueur, he moved to Rome in 1774 where he worked out a classisizm that was repeatedly awarded, after travelling widely he became professor in Kassel a. director of the local academy like his father was before, after winning a competition wrote out by Goethe he was commissioned several time to work for the Weimar court. - Mus.: Kassel, Weimar. - Lit.: Boetticher, Thieme-Becker, Bénézit a. others.