Born in 1938 in Nantong, Jiangsu Province, Fan Zeng is a contemporary master of traditional Chinese painting and is especially skilled in figure painting. His works fuse elements of landscape, flower-and-bird and figure painting, as well as forms of poetry and calligraphy. His paintings of ancient figures are famous for their simple but vivid style and vigorous strokes. Fan has held exhibitions in many places, including Hong Kong and Japan and is the first middle-aged Chinese painter whose works have entered two of the world's largest auction houses, Southeby's and Christie's. Since 1999, when Beijing began to auction paintings and calligraphic works, Fan's art attracted the attention of many Beijing dealers. Fan has a deep passion for traditional Chinese art. He once wrote a self-appraisal in a piece of calligraphy work and described himself as "crazy for painting, pretty good at calligraphy; occasionally writing poetry and prose to express feelings and loves to read about history." Fan's family comes from a long line of Song Dynasty descendants with thirteen generations devoted to making poetry, prose, calligraphy and painting. Fan started school at age of four and was a talented and diligent student. Since an early age Fan was greatly influenced by Feng Zikai, a famous Chinese painter and the major practitioner of the blunt, naive style of figure painting. Young Fan Zeng was fond of scribbling on the ground, walls and doors. The immature four-stroke Buddha figure he learned from his father revealed his talent for painting. Calligraphy was also an important subject for him, since the Fans had a long cherished tradition of calligraphy. Reading a calligraphy copybook (a book containing models of handwriting for learners to imitate) and practicing handwriting was daily homework for Fan. His family environment nurtured Fan's understanding of traditional Chinese culture, which has been deeply impressed into his temper, character and soul. Fan became a member of the Nantong Artists Association at the age of 13, which was his entry into art circles. Besides painting cartoons and posters required by the political situation at the time, Fan also made his own artistic creations. Fan's Chinese teacher at middle school was the first to discover his talents. The teacher found Fan could recite many of the classics by Li Bai, Du Fu, Bai Juyi and other famous poets. Once when visiting Fan's family, he found Fan was imitating a masterpiece. To his surprise, Fan had a torch tied to his cap, and explained that he was learning from Michelangelo! After graduating from Nantong Middle School in Jiangsu Province, he was admitted to Nankai University, majoring in history. Two years later he transferred to the Central Academy of Fine Arts to study art history where he later learned Chinese painting. Fan's teachers included famous artists such as Wu Zuoren, Li Keran, Jiang Zhaohe, Li Kuchan, and Liu Lingcang. Among these masters, Fan had the closest relationship with Jiang Zhaohe, who is not only a famous artist, but also an outstanding art teacher. He demanded a lot of Fan's ability to observe and his eye for details. He also warned Fan not to be obsessed with color and light, but to pay more attention to the structure of the object being painted according to the traditional Chinese painting methods. To express his gratitude, Fan painted a piece of portraiture as a gift for Jiang's 80th birthday. (Quelle: http://www.china.org.cn/english/NM-e/164859.htm) 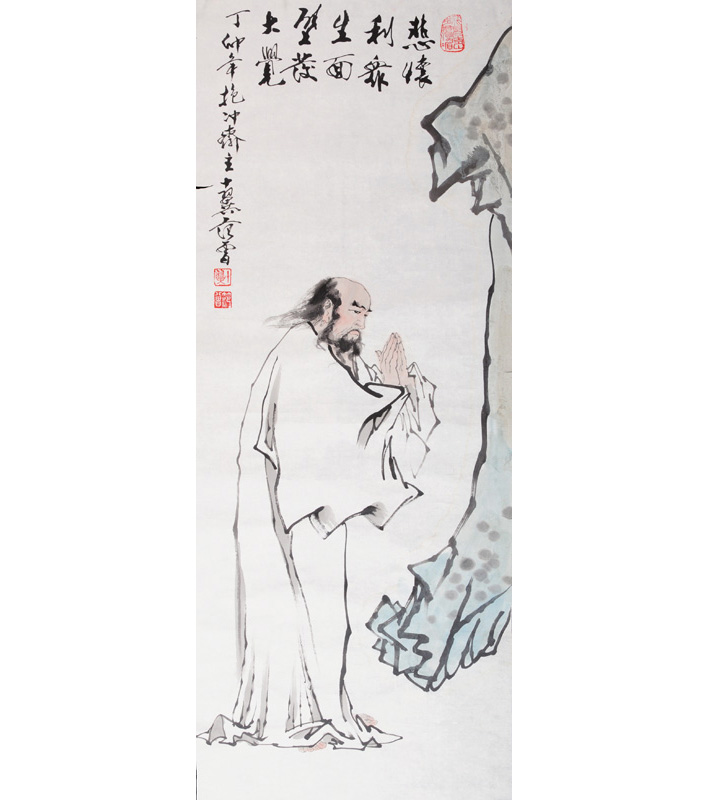